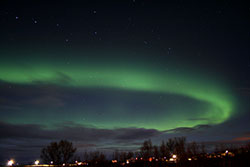 One of the most fantastic and beautiful visible phenomena in our atmosphere in northern regions are the Northern lights or Aurora Borealis.

The origin of this frequently moving and sometimes colourful phenomenon is linked with an event happening on the Sun, some days before.

The Sun has quiet and active periods during approx 11 year cycles.

The last active time was in and around 2012.
To view the auroras in southern parts of Norway we need an active Sun
and is it sometimes possible to view the Northern lights even in southern Europe.

When the Sun has a quiet period the Northern lights are only to be seen in a small area around the magnetic pole, the so called auroral zone.

The Polarlightcenter in Lofoten is in this area.

During a quiet period of the Sun, the so called coronal holes are more frequently present and cause the northern lights.

Polar light ( the general name for Northern light and Southern light) is caused by electrons and protons in the solar wind which clashes with thin gas molecules and atoms in our atmosphere.

Solar wind is always present but speed, density variations and the magnetic polarity in combination with our own earth magnetic field are responsible for the visual effects.

The auroras can be static as in a bow on the northern horizon or dynamic in that they dance in the sky with vertical structures and waving patterns.

Here in the Lofoten, in the polar light zone, there are often northern lights to be seen in the period from the beginning of September until the first week of April. After this period the nights are not dark enough anymore to view the auroras.